For several years, EuroMed Rights has also been spearheading a “tripartite dialogue” between civil society, the Tunisian Government and the EU in order to enhance human rights standards in EU-Tunisia bilateral relations in the area of gender equality, the rights of migrants and refugees, justice reform, and economic and social rights.

EuroMed Rights’ most recent publications on Tunisia and the list of members related to this programme are available on the right hand-side of this page. 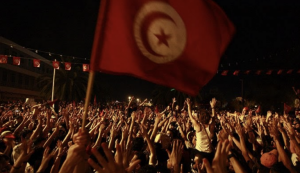 The COVID-19 pandemic lockdowns and the overall political situation in Tunisia after the declaration of a state of emergency on 25 July 2021 limited the joint work of human rights organisations and defenders. Despite the above, EuroMed Rights engaged with civil society organisations to formulate policy requests while working with state institutions to influence their policy agendas.

One example of civil society cooperation was the event held on 12 October 2021 gathering more than 40 civil society organisations in Tunis, agreeing to work together to draft an alternative report for the UN Universal Periodic Review (UPR) in 2022. It was the first time that such a large number of organisations were involved in this process in Tunisia.

EuroMed Rights’ mediation bridging civil society policy requests and authorities was productive. For instance, on 12 March 2021 the Minister of Women, Family, Childhood and Seniors expressed her interest and support for the activities carried out by EuroMed Rights and its partners in support of the national strategy to combat violence against women. On 1 October 2021, this interest culminated in the signing of a partnership agreement with EuroMed Rights to establish a tripartite dialogue on the empowerment of women and the fight against economic violence. This agreement received financial implementation support from the Swedish and Swiss governments in late 2021.

Public recognition of the good relations established between EuroMed Rights and the Minister of Women, Family, Childhood and Seniors were illustrated by the selection of activities organised by EuroMed Rights and its partners ahead of the 16 Days of Activism on Fighting Violence against Women in Tunisia. These activities featured in the 2021 programme brochure edited by the Ministry.

EuroMed Rights also established solid relations with the National Observatory of the Fight against Violence against Women. This was illustrated by the creation, on 26 November 2021, of a space for dialogue between the authorities and associative care centres for women victims of violence. Here, organisations can discuss the difficulties they face in carrying out their mandate in Tunis. EuroMed Rights also worked with the regional coordinating instances to combat violence against women in Kasserine and Ben Arous, in order to develop a roadmap on access to justice for women.

EuroMed Rights pursued its advocacy work in Tunisia, culminating in the adoption on 7 April 2021 by the Tunisian government of the decree to establish a National Commission for Combating Racial Discrimination in Tunisia, which represents a significant step in a years-long process that EuroMed Rights and its partners had advocated intensively for.

As regards the support provided to the national public authorities, as promised the National Authority for Access to Information (known by its French acronym INAI – Instance d’Accès à l’Information) initiated bilateral work with representatives of the sector during a meeting in Sfax. In addition, all national authorities agreed on elaborating communication strategies combatting violence against women, coordinated by EuroMed Rights.

“What a journey it has been since the network was founded in 1997!”