Violence against Women: a Battle that should be Won

A New Tool for NGOs to Fight Violence Against Women 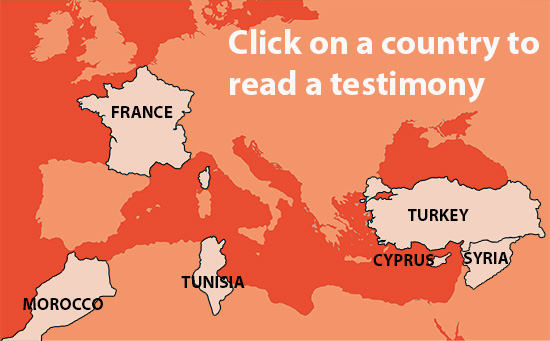 Violence is still a bitter reality for far too many women over the world, and in the Euro-Mediterranean region. Yet, tools exist to protect women and fight for their rights. On the second anniversary of the Istanbul Convention, EuroMed Rights collected the testimonies of its member organisations engaged in fighting all types of violence against women.

The “Convention on preventing and combating violence against women and domestic violence” is a treaty from the Council of Europe, which opened for signature on 11 May 2011 in Istanbul. This convention is an important milestone in the fight to eliminate violence against women as it is legally binding and open for signature to non-members, i.e. from the southern Mediterranean. To-date, the Convention has been signed by 42 countries and ratified by 22.

The Convention finally recognises the outstanding role of NGOs in providing services to the victims of violence and seeks to ensure greater political and financial support for their work.

Through the testimonies of women’s rights activists, EuroMed Rights and its member and partner organisations want to raise awareness on the pioneering aspects of this Convention and call on all women’s rights organisations across the Euromed to use the Convention, so they are better equipped to make a palpable difference in the lives of the women and children affected by violence.

The Convention on preventing and combating violence against women and domestic violence is the first legally binding instrument that provides specific measures with regards to prevention, protection and prosecution of all forms of violence against women. The most interesting aspect of the Convention is the fact that it puts obligations on member states to establish risk assessment mechanisms, in order to better facilitate the reporting of cases of violence against women (including domestic violence, stalking, sexual harassment, rape etc.), as well as to ensure systematic and consistent multi-agency support for victims.

In the last 10 years MIGS has been implementing awareness raising interventions with young people using a variety of non-formal, experiential, interactive methods. Human rights and gender equality approach underpin these workshops. Our educational interventions aim at educating young people on gender stereotypes and gender inequalities that exacerbate VAW, specifically intimate partner violence. These actions constitute a precise fulfillment of Article 14 of the Convention concerning education, clearly stating that teaching material, for instance on gender equality, non-stereotypical gender roles, mutual respect, non-violent conflict resolution in interpersonal relationships and the right to personal integrity, should be adapted to the evolving capacity of learners and be included not only in formal settings (schools), but also in non-formal settings (sports, cultural and leisure facilities and the media).

After over 2 years of lobbying advocacy, the Government of the Republic of Cyprus signed in June 2015 the Istanbul Convention on preventing and combating violence against women and domestic violence. But our efforts are not over yet, as we are currently advocating and providing expertise and technical support with recommendations to relevant governmental bodies on how to make necessary legal and policy changes aiming to ratify this convention. Specifically, MIGS has been in close collaboration with the Cypriot Ministry of Justice providing technical support through a legal study mapping the current legal maps on VAW and a mapping study on risk-assessment mechanisms, which could serve as good examples to be established in Cyprus – where there are challenges in appropriate risk-assessment of violence against women cases.

European Association for the Defense of Human Rights (AEDH)

This Convention is the first binding European treaty specifically dedicated to preventing and fighting violence against women and domestic violence. It is considered the most ambitious treaty on the subject: it targets all forms of violence (psychological, physical, sexual harassment, forced marriage, female genital mutilation, forced abortion and sterilisation, which are criminal offenses under the Convention), it encompasses all victims (women, but also men and children who have suffered from domestic violence) and finally it foresees all measures (prevention, protection and punishment).

Another innovative feature is the fact that in its preamble the Convention recognises the structural nature of violence against women and the need to address the psychological and social roots of gender discrimination. The Convention rejects any justification of violence in the name of culture, custom, religion or tradition.

What is interesting about the Convention is also its pedagogy and its comprehensive approach, which advocates for a range of appropriate measures, including: training of professionals that offer support to victims, launching regular awareness campaigns, adding gender equality and non-violent conflict resolution in educational curriculum, the development of therapeutic programs for perpetrators of domestic violence and sexual offenders, and working with NGOs and the media to eliminate gender stereotypes and to promote mutual respect. Although Morocco had already adopted some of these measures, what is new is the extent of the coordination and the commitment to increase the budget for these measures.

Furthermore, what is groundbreaking is that the treaty is open for ratification also from non-member States of the Council of Europe, such as South Mediterranean countries. These States can integrate the provisions of the Istanbul Convention, which will encourage states to improve their judicial framework and the prevention and protection measures.

Lastly, the Convention can be used as a diagnostic tool to evaluate the institutional efforts and the legislative framework protecting women and preventing VaW, and it provides more visibility for the steps that need to be taken in the future.

Despite the efforts taken by institutional and non-institutional actors in the fight against violence against women, the numbers on VAW released by the last national survey of the High Commission for Planning (HCP) are alarming.

Thanks to our knowledge of the Moroccan context and the comprehensive approach of the Convention, we can:

The context is now suitable because Morocco is currently revising its body of law and it is a privileged partner of Europe through the European Neighborhood Policy. The ADFM believes Morocco is ready for the ratification of the Istanbul Convention.

What do you see as the one major challenge to fight against violence against women in your country?

The protection / legal framework is one of the main issue that needs to be addressed and to be worked on and activated. The biggest challenge facing women in addition to the absence of legal protection is the violence and war with all its social dimensions which generated all kinds of masculinity in all parties, violence against women takes many forms, not just armed violence, but domestic violence and community violence, using the name of religion and by militants or extremism religious who uses women body as a tool to enable its dominance in the society, as well as forcing women to engage in the fight.

Current work must be to stop the war and this will take long and hard work to reverse the changes the whole community and this requires empowering women to take a positive role in peace-building. On other hand we cannot ignore the violence resulting from the donors’ policies which are based on creating negative competition for funding, rather than on the integration and positive competition

In the fight to eliminate violence against women in your country, can you list one major achievement?

The increasing number of women/feminists’ groups which contributed in some way to change the perception of women’s participation in work and take advantage of a bad situation to promote a positive and effective engagement of women.

Following the CEDAW, which identified discrimination as the cause for deprivation of human rights for women, the Istanbul Convention completes the first treaty by prioritizing the idea that violence against women nourish from discrimination.

The importance of the Istanbul Convention resides in the identification of violent conduct and degrading treatments in order to suppress them from social relations in both private and public spheres. Must it be reminded that corporal punishment continue to be considered as the safest way to influence the behavior of children and is still largely used in family and school environments.

This legally binding tool will contribute to dissuade violent conduct, while the sensitization on the principles of the Convention will favor social change, which currently remain too tolerant regarding such conduct.

What can Women’s Rights organisations do to use the Convention if they want to make a change on the ground and in the lives of the many women victims of VAW?

A work of information and sensitization already undertaken by the LTDH will profit human rights militants and will be positively used by NGOs and voluntary circles on the public opinion.

Turkey was the first country to sign the Istanbul Convention, thanks to the advocacy efforts of strong women’s rights movements. Since then, it has promptly adapted its laws to ensure they are aligned with this regional instrument.

Nevertheless, domestic violence, sexual assaults, so-called “honour killings” and human trafficking are widespread phenomena and affect the lives of countless women. With more than 1400 women killed between 2010 and 2016, Turkey has one of the highest rates of femicide in the region.

Turkey has adopted a comprehensive legal framework, but its implementation remains a serious challenge and major efforts are still needed to drive real change forward. Following the adoption of the Law on the Protection of the Family and the Prevention of Violence against Women (N.6248), Turkey’s government established several Violence Prevention and Observing Centers (ŞÖNİM), in charge of monitoring and supporting the implementation of the Law. Yet, as reported by many NGOs, these centers are still too few and not easily accessible to women, hence inefficient.

In addition to practical difficulties, the recurrence of more conservative interpretations of the role of women within Turkey’s society directly affects women’s position in private and public spheres.

What can Women’s Rights organisations do to use the Convention if they want to make a change on the ground and in the lives of the many women victims of VAW?

Turkey has committed to setting up comprehensive measures to combat violence against women, in compliance with the Istanbul Convention. These measures include the provisions embedded in the Law on the Protection of the Family and the Prevention of Violence against Women, as well as several reformed articles of the penal code.

NGOs can use those instruments to monitor and ensure the correct implementation of the laws on the ground, and they can provide information on shortcomings of this implementation to the relevant institutions. This includes giving opinions on the budget allocated to put in place the pledged measures.

All NGOs can contribute to the work of the GREVIO (the Council of Europe experts’ committee that evaluates the Parties’ implementation of the Istanbul Convention), by sending information or shadow reports, based on the online questionnaire, by February 2017. The GREVIO will submit a report on Turkey to the Committee of Parties of the Council of Europe in June 2017. By supporting the work of the GREVIO, NGOs can boost the impact of their national advocacy efforts.

BACK TO THE TOP OF THE PAGE