JOINT: Declaration on the State of Emergency in Turkey 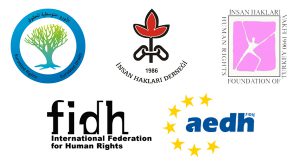 Brussels, Paris, Ankara 5/8/2016 – EuroMed Rights, AEDH, FIDH, IHD and HRFT express deep worries over the state of emergency declared in Turkey for a period of three months following the July 15 coup d’état attempt in which hundreds of civilians, soldiers and police officers lost their lives. The state of emergency allows the president and the Council of Ministers to rule by decree, therefore bypassing the parliament and undermining democratic standards. It also “partially or entirely” suspends the exercise of human rights and fundamental freedoms, including Turkey’s obligations under the European Convention on Human Rights.
Our organisations jointly reaffirm that stability can only be restored by upholding human rights and the rule of law. The Turkish government should strictly respect the principles of legality, necessity and proportionality. It should abide by its international human rights commitments at all times. The discussion over the reintroduction of the death penalty for alleged coup plotters and the project to amend the constitution are another source of concern for the future of human rights in Turkey. According to international human rights law, security measures can be taken in a situation of crisis, though only as a continuation of the rule of law.

The perpetrators must be brought to justice following an independent, impartial, thorough and prompt investigation. The prosecution should comply with international fair trial standards and the presumption of innocence must be respected. Persons for whom there is no evidence of wrongdoing should not be victim of baseless investigations and restrictive measures. Our organisations are concerned about the violent and indiscriminate reaction by the State. This has targeted on the one hand the military and the judiciary, with the hasty arrest of several thousands of people allegedly involved in the coup, and on the other hand journalists, lawyers, NGOs and other critical voices, including a blanket ban on travel for academics.

So far, around 50,000 public officers have been suspended from their offices and numerous private schools, foundations and universities were taken over by the government. Similarly, tens of associations and media outlets were closed down. All persons arrested must be granted their rights enshrined in international law and Turkish authorities should be held accountable for their safety and protection. Investigations must be conducted in a manner that respects the rule of law. Critical voices must retain the right to expression in public spaces.

This attempt comes in a context of serious violations of human rights and the rule of law by the authorities in Turkey: restrictions to the right to freedom of expression and media freedom, stripping of immunity and threats of prosecution of the parliamentary opposition, criminalisation of dissent, plans to concentrate the power in the hands of the president, willingness to turn religion as a weapon of government and implementation of a violent repression in the south-east.

The coup attempt ought to be condemned, but it should not serve as a pretext for the Turkish authorities to weaken democracy, the rule of law and human rights, to strengthen the current authoritarianism and to further weaken the situation of migrants on its territory.

We call on the international community, in particular the EU, to remain vigilant and urge Turkey to act in compliance with its international human rights obligations. Geopolitical interest should not prevail over the respect for the rule of law and human rights.

Racism, a pandemic in the Euro-Mediterranean too

Pandemic does not deter violence at borders

An unexpected window of opportunity for civil society online