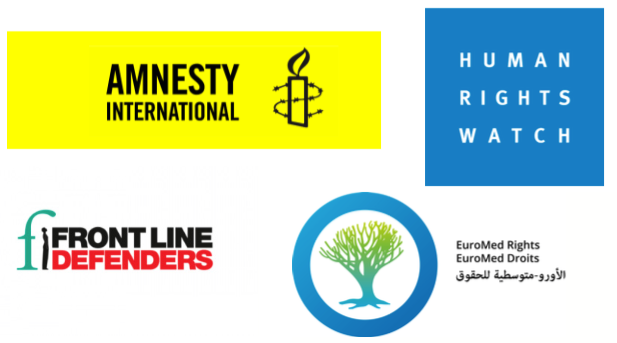 Fekhar and Other Amazigh Rights Advocates Held Since July 2015

The Algerian authorities should drop all charges against a leading activist and his 40 co-defendants that are based on their peaceful activism for the rights of the Amazigh, or Berber, minority, EuroMed Rights, Amnesty International, Human Rights Watch and Front Line Defenders said today. Kamaleddine Fekhar and most of his co-accused have been detained since July 2015.

Regarding other violence-related charges that the defendants face, the authorities should immediately release them from pretrial detention unless there is individual justification in each case of the necessity for their continued detention after nearly two years. All the detainees are entitled to a trial within a reasonable time. The defendants face very similar charges, including murder, terrorism, and other serious offenses that could result in the death penalty, for their alleged role in the deadly ethnic clashes that erupted in the Mzab region between 2013 and 2015.

“If Algerian authorities are to try those suspected of instigating and participating in deadly violence in Ghardaia Province, it should be on the basis of solid, individualized evidence,” said Sarah Leah Whitson, Middle East director at Human Rights Watch.

The accusation chamber, a pretrial chamber tasked with confirming or rejecting charges based on a report by an investigative judge, issued its 150-page decision to refer the case to trial on February 14, 2017. The signatory organizations have reviewed the report. Algeria’s High Court rejected the defense’s appeal of the decision, and the trial opened on May 25.

Fekhar headed the section of the Algerian League for Human Rights in the city of Ghardaia from 2004 to 2014. In late 2013, he founded the Movement for the Autonomy of the Mzab, a northern Sahara region, and has condemned the government for what he called a policy of apartheid and discrimination against the Mozabites, an Amazigh ethnic minority in the region. Most of the co-accused are also pro-Amazigh activists who favor autonomy for the Mzab.

“No one should be prosecuted for his peaceful advocacy for rights of minorities, including for regional autonomy and independence, in compliance with international obligations of Algeria,” declared Michel Tubiana, president of EuroMed Rights.

Under international human rights law, governments may penalize incitement to violence, hatred, or discrimination. But laws prohibiting incitement must be defined in a clear, narrow, and specific way consistent with protecting the right to freedom of expression. Prosecuting incitement to violence should be limited to cases in which the incitement is intentional and directly linked to the violence. Prosecutions for incitement to hatred or discrimination should never include peaceful advocacy for the rights of a segment of the population or regional autonomy or independence.

The court rejected requests by the defense lawyers to have their clients released on bail pending trial, most recently on February 14. The judicial authorities did not provide specific facts or circumstances to justify the rejection, as required under international human rights law and standards.

In addition to the flawed charges and evidence, the lengthy pretrial detention of the accused, without providing a justification in each case of the necessity for continued detention, violates their rights to liberty and due process, which include the presumption of release pending trial.

Article 14.3(c) of the International Covenant on Civil and Political Rights, ratified by Algeria along with its Optional Protocol, states that “in the determination of any criminal charge, everyone shall be entitled to be tried without undue delay.” The Principles and Guidelines on the Right to a Fair Trial and Legal Assistance in Africa, adopted by the African Commission on Human and Peoples’ Rights in 1999, stipulate that “unless there is sufficient evidence that deems it necessary to prevent a person arrested on a criminal charge from fleeing, interfering with witnesses or posing a clear and serious risk to others, States must ensure that they are not kept in custody pending their trial.”

Fekhar started a hunger strike on January 3, 2017, to demand his release but suspended it on April 20. Authorities arrested Fekhar and 30 co-defendants on July 9, 2015, at a house he owns in the city of Ghardaia following the intercommunal violence that erupted in Ghardaia Province earlier that month, the latest flare-up in this ethnically tense region. The rest of the accused were arrested in 2016, on July 26 and December 12.

Violence has erupted sporadically between Mozabites and Arabs in Ghardaia Province since 2013.One of the deadliest episodes, from July 7 to 10, 2015, left about 25 people dead and more than 70 injured from both communities, most from gunfire, according to media reports.

The accusation chamber approved charges against Fekhar that include terrorism, incitement to hatred or discrimination, distributing material harmful to the national interest, and defamation of state institutions, all under the penal code. In addition to those charges, some of his co-defendants were also accused of forming a criminal gang to commit crimes and premeditated murder. Several of these offenses are punishable by death.

The accusation chamber’s report, which set out the charges, is problematic for three reasons: first, the report fails to cite incriminating evidence against the defendants for the offenses that criminalize violence, such as specific “terrorism” provisions, murder, and arson; second, it includes offenses that should be abolished because they criminalize peaceful speech that is protected by international human rights conventions, such as “defaming state institutions” and “distributing material harmful to the national interest”; and third, it includes offenses that are recognizable, such as incitement to hatred, discrimination, or violence, but that need to be proven according to narrow and precise definitions of these offenses, consistent with Algeria’s obligation to respect the right to freedom of expression.

The accusation chamber report cites no evidence indicating that Fekhar or any co-defendant planned or carried out any act of violence. Instead, it justifies the charges on the basis of recordings of their speeches, without providing evidence that they contained incitement to violence; the fact that they held meetings; and their membership in Amazigh movements. The chamber also considered the fact that an unidentified individual in the vicinity of Fekhar’s house had targeted the judicial police agents by aiming a firearm and throwing homemade explosive devices during the arrest operation as evidence that the defendants were part of a criminal gang. The individual did not injure any of the police and evaded capture so is therefore not among the defendants.

The accusation chamber’s report cites a video of a meeting between Fekhar and several of the co-accused, dated October 5, 2013. According to the report, in this video, Fekhar declares that a “divorce” between the Mozabites and the Arabs is inevitable. He chastises the police for not pursuing those responsible for violence targeting the Mozabite community, calls the Arabs “invaders” and “hypocritical,” and declares that the “authorities are dictatorial, corrupt, criminal, repressive” and partial towards the Arab populations.

The report cites another video in which Fekhar reportedly says, “We are in our land and the lands of our ancestors, the Arabs are not guests but invaders; we have to get them out of our land and from all of North Africa, Daesh [Islamic State] is the root of the corruption and the crimes.”

As for the others accused, the accusation chamber cites police reports identifying them as among those attending the meeting shown in the October 2013 video. The chamber also cites statements that the accused made to the police acknowledging that they are pro-autonomy activists, their presence in Fekhar’s house during the July 9, 2015 arrest operation, and their participation in marches or demonstrations for the rights of the Mozabites.

In presenting evidence of belonging to a criminal gang and attempting to destabilize state security, the court lists pro-autonomy groups in which Fekhar and others were active.