EuroMed Rights is one of the largest and most active networks of human rights organisations in the Euro-Mediterranean region.

Founded in 1997, EuroMed Rights encompasses 70 organisations from 30 countries. Its work is aimed at promoting and protecting human rights and democracy in the Southern and Eastern Mediterranean regions and at influencing the policies of major European actors towards these areas.

EuroMed Rights' vision is human rights and democracy for all in the Euro-Mediterranean region.

Its mission is to strengthen the collaboration between human rights organisations from the South, the East and the North of the Mediterranean, and to increase their influence at home and abroad. This mission is achieved by facilitating the creation of joint strategies and action plans between members, and by conveying their shared analyses and views to decision-makers and to the public.

In the period from 2022 to 2027, EuroMed Rights will organise its work around the five political goals below:

EuroMed Rights will, in parallel, strive to achieve the subsequent five organisational goals:

EuroMed Rights works through, for and in collaboration with its members. Besides, we engage with hundreds of other civil society organisations and with national and international state institutions operating in the field of human rights. We do so by combining the key work methods explained below.

Analysis and monitoring: EuroMed Rights monitors the development of the human rights and democracy situation in the Euro-Mediterranean region through desk-studies, field missions and other forms of data-collection. We also procure or produce fact-checked analyses of key trends and phenomena of relevance for our work. We use the results of the monitoring and analysis to strengthen the capacities and understanding of our members on specific issues and processes. We also use them as input and background for our political positioning and in the planning of our programme and advocacy and communication activities.

Collaboration and co-creation: EuroMed Rights facilitates collaboration and co-creation among its members and stakeholders. In our co-creation processes, we often reach beyond the civil society sector to engage and mobilise national and international state actors and institutions. Most of our work is implemented through the organisation of a broad number of working groups, in which our members meet with their peers and with other stakeholders to exchange ideas, receive training, make joint action plans, and take joint decisions.

Advocacy and communication: EuroMed Rights influences and reaches out to decision-makers, policymakers and the broader public through its advocacy and communication work. It does so in close collaboration with our members and partners. Our advocacy actions target international bodies such as the EU, as well as both regional and national governments including the EU member states and governments in the Southern and Eastern Mediterranean.

Mainstreaming: EuroMed Rights uses mainstreaming to address issues and concerns that affect the entire organisation. We systematically conduct gender mainstreaming throughout our work and ensure that freedom of expression, freedom of association, the right to peaceful assembly and movement, and access to decision makers and funding for civil society are addressed in all our programmes

You can find EuroMed Rights' 2022-2027 full strategy "Improve and Advance" on this link.

EuroMed Rights Secretariat, headed by Executive Director Rasmus Alenius Boserup, is in charge of implementing the organisation's three-year work programme, as well as strategies and action plans adopted by the Executive Committee.

The General Assembly is the supreme body of EuroMed Rights; it meets every three years and elects the Executive Committee.

Secretary general of the movement SOLIDA (support of Lebanese detained arbitrarily) and President of the Lebanese Centre for Human rights (CLDH). Wadih Al-Asmar is also one of the founders of the Lebanese social movement #youStink.

Executive member of the Bar Human Rights Committee of England and Wales. Theodora Christou is a barrister and an academic teaching at the London School of Economics and at Queen Mary University of London. Her primary areas of expertise are human rights, international and comparative law.

Secretary general of Jordanian association Mizan for Law. Lubna Dawany is also a Legal Advisor and Board Member of the Family Development Association. Since the 1990s, she has co-founded a number of NGOs in Jordan to fight violence against women, human rights and women rights.

Member of the board of directors for the Cairo Institute for Human Rights Studies (CIHRS) , co-founder and chairman of the Egyptian Human Rights Forum. He previously represented key international human rights NGOs in the MENA region including the international Centre for Transitional Justice (ICTJ) and Front Line Defenders. He is currently assistant professor and head of human rights program at Doha Institute for Graduate Studies.

Professor of law at the University of Carthage, she chaired the Tunisian Association of Democratic Women from 2016 to 2018. She participated in the first group of experts in charge of drafting a bill on the eradication of violence against women, adopted by the Tunisian parliament in 2017.

A lawyer by training, Giorgio joined the UNDP Arab regional programme for the prevention of HIV/AIDS following his studies at the EMA Human Rights programme in Venice. After some time working in the coordination of activities for the International Rehabilitation Council for Torture Victims within MENA. He joined Dignity-Danish Institute Against Torture in 2012 as manager for MENA.

Co-ordinator of the NGO 80:20 Educating and Acting for a Better World based in Ireland, programme manager of the developmenteducation.ie consortium and board member of Fairtrade Ireland. Tony teaches and supports popular education on human development, human rights and active citizenship.

Dilyana Giteva is an attorney at the “Center for Legal Aid – Voice in Bulgaria”. She is actively engaged in counseling, litigation and representation of asylum seekers, refugees and migrants in front of administrative authorities and courts in Bulgaria and Europe.

Deputy Director of the Palestinian Centre for Human Rights for Program Affairs. His main area of expertise is democratic development, and civil and political rights.

Member of the National Board of the Associazione Ricreativa e Culturale Italiana (ARCI) and Vice President of ARCS (ARCI’s NGO). Franco is a member of the boards of the European Civic Forum, of the International Federation of Settlements and collaborates with the Solidar International Cooperation Forum. He works mostly on human rights, peace, participatory democracy and solidarity.

Marie-Christine Vergiat has been committed to human rights since 1983 within the French Human Rights League, where she is currently Vice-President in charge of economic and social rights and migration issues. She was a member of the European Parliament (GUE) from 2009 to 2019 and has been a member of the Committee on Civil Liberties, Justice and Home Affairs, the Subcommittee on Human Rights and the EU/Maghreb Delegation.

Former President of EuroMed Rights (from 2003 to 2012), former Tunisian minister in charge of relations with constitutional institutions and civil society (2015-16). Kamel Jendoubi also presided the Tunisian High independent instance for the elections (2011-2014), and currently chairs the UN Group of experts to investigate human rights violations in Yemen.

EuroMed Rights fundraising strategy is articulated around three general principles; ensuring the network’s independence; minimising our donor dependence and guaranteeing our financial sustainability. EuroMed Rights would like to acknowledge and thank the following donors for their financial support: 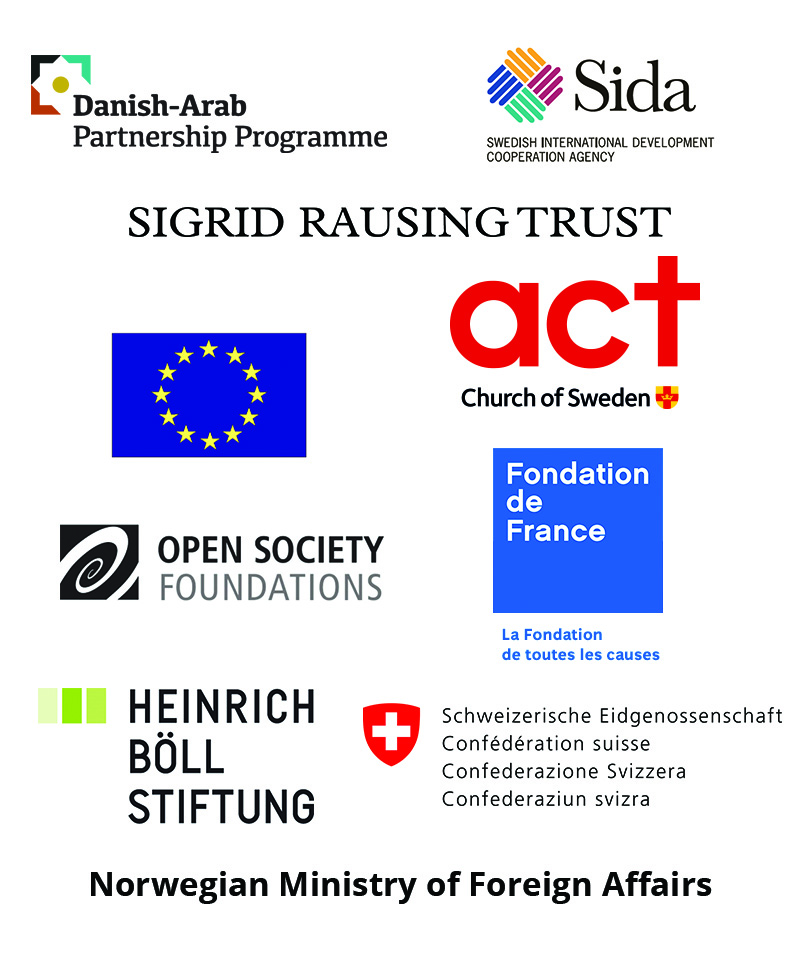