This Thursday 23 March, Aya Hegazy, a dual US-Egyptian citizen and founder of the Belady Foundation, together with six co-defendants, including her husband Mohammed Hassenein, should have known their fate. Yet the ruling has been postponed until April 16 2017.

Despite the fact pre-trial detention should only be used in exceptional circumstances, and despite a lack of credible elements to incriminate her, the young woman has been detained nearly 1100 days since May 2014. EuroMed Rights condemns those three years of detention.

As revealed by the interim trial observation report, published jointly with the Bar Human Rights Committee of England and Wales and the Cairo Institute for Human Rights Studies, multiple violations of international law have been committed during the trial of Aya Hegazy. The report finds that Ms Hegazy’s right to a fair trial, her right to the presumption of innocence, and her ability to mount an effective defence have all been violated, in breach of the International Covenant on Civil and Political Rights, the African Charter, and the Egyptian Constitution. The report notes as well that the court has given no explanation for their failure to grant bail, and concludes that Ms Hegazy’s ongoing detention is arbitrary and punitive in nature.

Our organisation denounces the systemic failures of the Egyptian criminal justice system, such as the use of cages to hold Aya Hegazy and other defendants in court, which demean the integrity of defendants. This also interferes with the presumption of innocence, and the lack of opportunities for defendants and lawyers to meet in private, restricting their ability to prepare for the trial. 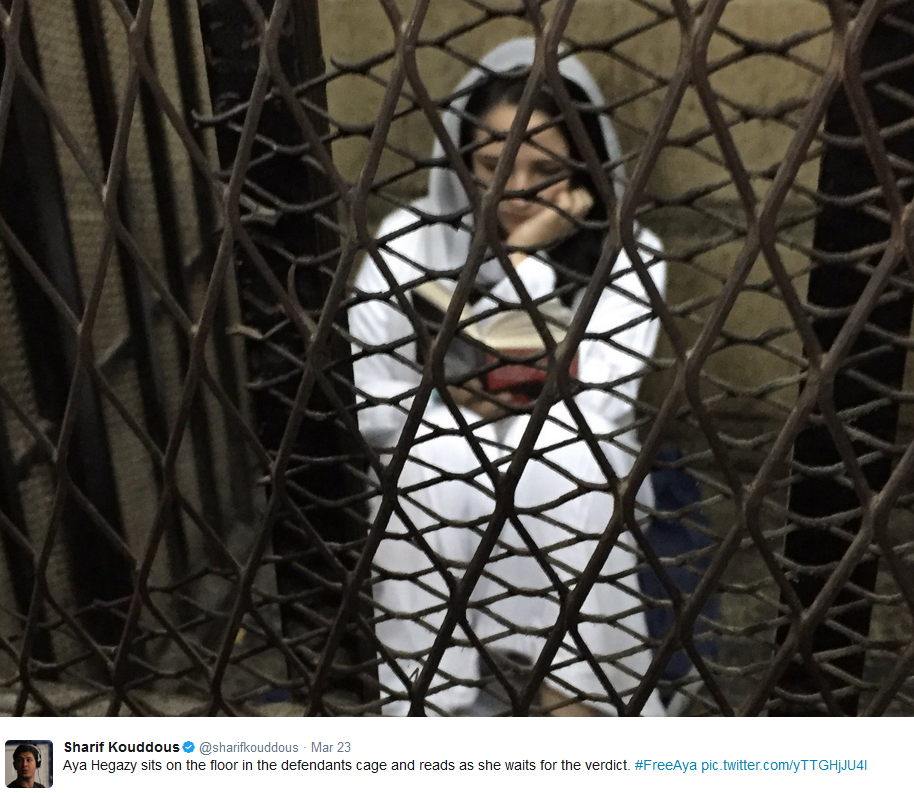 Together with her husband, Aya Hegazy founded the volunteer organisation Belady Foundation in 2013. The foundation aims at rehabilitating and reintegrating street children back into society and reuniting them with their families.

On 1 May 2014, security forces entered the Belady premises. Aya Hegazy, Mohamed Hassenein, Sherif Talaat, Amira Farag and a group of resident children were arrested. The police presence arrived allegedly in response to an earlier act of trespass by a man who had claimed that his son was being kept against his will in the Belady premises. Yet the man’s son was not found on the premises. The remaining four defendants were arrested at different times, in what is alleged to have been an entrapment by police. Material, including computers, was seized both from the foundation’s premises and later from Aya and Mohammed’s home.

Four months later, on 8 September 2014, the Referral Order charged Aya Hegazy, her husband, and six others with seven counts. The charges relate to organising a group for the purposes of human trafficking, holding children for the purposes of sexual exploitation, sexually exploiting the children, using them to disturb the peace in protests against security forces and operating an unregistered civil society organisation. The defendants, their families and numerous other organisations fervently deny these charges.

Find out more about activists currently held in prison and the Human Rights Behind Bars in Egypt.