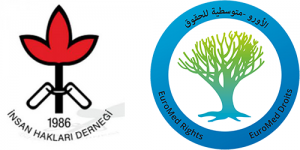 For the attention of

As the high level political dialogue with the Turkish delegation led by Foreign Affairs Minister Mevlüt Çavuşoğlu is taking place today in Ankara, EuroMed Rights and the Human Rights Association (IHD) take this opportunity to call upon your Excellencies to raise their concerns on the ongoing repression of civil society in Turkey as well as the restriction of the basic rights and freedoms of Turkey’s citizens.

The latest arbitrary arrest, on Friday 16 November, of 13 prominent academics and civil society members represents yet another example of the situation which the representatives of civil society organisations are facing, particularly since the attempted coup d’état in July 2016, and whose civil rights and fundamental freedoms are constantly restrained.

Despite the lifting last July of the two-year long State of Emergency (SoE), Turkey has adopted and enforced a new restrictive law, the Law no. 7145, integrating the SoE’s exceptional restrictions into ordinary law. Furthermore, last October, the Turkish government amended the Law no. 25772, the Law on Associations, establishing a new restrictive procedure for the compulsory registration, within a 30-days delay, of CSO and NGO members and activists.

These new laws set the foundations for future violations of the right to freedom of association. As provided for by art. 22 of Law no. 7145, dismissal of persons from public office will continue through commissions to be established at every public institution and organisation and by the consent of the related minister. Indeed, the SoE order is being maintained in just the same way as SoE Emergency Decrees by introducing such a concept as persons “having connection with” structures and entities posing a threat to national security and terrorist organisations. It also sets forth that passport invalidations of those who have been and will be dismissed will continue. This article, read in conjunction with the amended Law on Association, would hamper citizens’ participation in CSOs and NGOs and will prevent them from enjoying their right to freedom of assembly, as enshrined by the International Covenant on Civil and Political Rights, by art. 11 of the European Convention on Human Rights and art. 33 of the Turkish Constitution.

Furthermore, EuroMed Rights and IHD urge Your Excellencies to raise their concerns on the Turkish government’s crackdown against the weekly peaceful gatherings of the members of the “Saturday Mothers” (Cumartesi Anneleri in Turkish) movement, whose relatives disappeared in suspicious circumstances while in police custody during the 1980s and 1990s. Since 1995, the movement organises peaceful vigils in Galatasaray square in Istanbul, denouncing enforced disappearances and state-sponsored violence and expressing their legitimate demand for justice. Last August, after the government’s announcement banning the gatherings, the participants in the 700th peaceful vigil were attacked by riot police forces and some of them were detained.

According to international human rights conventions to which Turkey is party, including the European Convention on Human Rights and the UN International Covenant on Civil and Political Rights, the authorities have a responsibility to protect and facilitate the right to peaceful assembly. Moreover, Article 34 of Turkey’s Constitution guarantees freedom of assembly, stipulating that “everyone has the right to hold unarmed and peaceful meetings and demonstration marches without prior permission.”

Your Excellencies,  strongly believe that peaceful dissenting voices constitute the very essence of a democracy and must not be criminalised or silenced, but they should be respected as relevant actors for the improvement of the society. Turkish authorities must respect the legitimate demands of the citizens of Turkey to exercise their basic rights and fundamental freedoms.

In light of this, and in line with the EU’s commitments to promote human rights through all its external actions, EuroMed Rights and IHD call on Your Excellencies to ask the Turkish authorities to:

• Cease the judicial harassment against Human Rights Defenders (HRDs), CSOs and NGOs
• Highlight that a free civil society and an independent judiciary are key principles of the European Union
• Amend all legal provisions incompatible with the right to freedom of assembly and association
• Revoke the Law no. 7145 and the recent amendments of the Law no. 25772
• Review the broad definitions of “terrorism” and “propaganda” in all anti-terrorism laws and in the Penal Code, unconditionally drop politically-motivated charges and proceedings and stop prosecuting under terrorism charges HRDs, journalists, and other dissenting voices

Your Excellencies, we call on you to take our concerns with the most serious consideration and to raise them, jointly and individually, during the upcoming high level political dialogue with the Turkish authorities.

We also call upon Your Excellencies, as the representative of the European Union, to enhance the EU dialogue with CSOs at the highest level, in order to encourage the Turkish government in adopting the same approach.

We remain at your disposal to provide any further information you may require.

With the forgotten migrants of the Canary islands

Egypt: time to fight against the normalisation of violence

2020 or the trivialisation of police violence