Fourth anniversary of the Istanbul Convention’s entry into force

This statement is written black on white in the Council of Europe’s Istanbul Convention, which celebrates today, 1 August 2018, its 4th anniversary since its entry into force.

On this occasion, President of EuroMed Rights, Wadih Al-Asmar declares:

“EuroMed Rights believes that the importance of this Convention resides precisely in the fact that it is the first legally binding treaty identifying violence against women both as a human rights violation, and a form of discrimination against women.

This definition is crucial in the Euro-Mediterranean region, where millions of women are affected and threatened by violence and discrimination, whether physical, psychological, legal or economic. Combating Violence against Women needs more than mere will, it needs legal and binding tools, as the Istanbul Convention.

As a Euro-Mediterranean network, we find the Convention particularly useful, since it is open to accession for both member and non-member countries of the Council of Europe, thus including both North and South Mediterranean countries. It also constitutes an important standard setting tool for legislation on violence against women across the region.

Unfortunately, while most EU countries – as well as the EU itself – have either signed or ratified the Convention, no Southern Mediterranean country has so far done so.

Therefore, on this symbolic day, we wish to reiterate to all governments in the Euro-Mediterranean region the importance of ratifying and properly implementing the Istanbul Convention.”

Below are two interviews highlighting experiences in:

In Morocco, 2018 began with the adoption of law 103.13 aimed at fighting violence against women, a law far from being a step forward when it comes to the protection and prevention of gender-based violence.

The shortcomings of this law, which merely consist of a series of amendments to the penal code, are profound: it does not criminalise all forms or types of violence, as it excludes for instance marital rape. It also does not protect all women, excluding for example single mothers and migrant women.

In fact, in his report on law 103.13, the Special Rapporteur on Violence Against Women has expressed his concern about the “lack of adequate protection measures prior to sending a woman back to her home, in which she was allegedly subjected to violence. The weakness of the proposed reforms in relation to rape, sexual assault […] and the maintenance of laws in their current form oblige women to provide evidence of the violence suffered, and makes them liable to prosecution for extra-marital relations, instead of benefiting from protection and reparations as a victim of sexual violence that their situation calls for.“

For this reason, among others, the Istanbul Convention would be a very important legal tool, as it allows ratification by States who aren’t a member of the Council of Europe.

We must ensure that the issue of combatting violence against women is on the national, regional and international political agendas.

The harmonisation of Moroccan legislation with such a convention would guarantee women and girls real protection, quality care and preventive measures. It would also provide a framework for multiple aspects of violence and deny cultural, religious or traditional justifications for it. It would also highlight requirements in terms of education and awareness (awareness campaigns, teaching materials, training of professionals, involvement of men, etc.). Finally, it would recognize the just work of civil society, their involvement and the political and financial support channels provided by the Convention.

For these reasons, following the EuroMed Rights campaign around the Istanbul Convention and with its support, ADFM organized a training in 2016, which led to the constitution of a Coalition of organisations in December 2017. Its objective is to carry out joint advocacy actions for Morocco to accede to the Convention, notably to MEPs visiting Morocco or in meetings with the representative of the Council of Europe in Morocco.

We count on the Council of Europe, which in its Neighborhood Partnership 2015-2017 with Morocco committed itself to encouraging the latter to harmonise its legislation with European and international standards and to ratify the Council of Europe conventions open to non-member states, such as the Istanbul Convention.

We also count on the EuroMed Rights network, of which we are members, to support and assist us in this advocacy process, which proves to be a challenge that deserves the mobilisation of all the members of the Network.

The road is still long to achieve effective equality between men and women, but the fight continues.

When, from an early age, I became aware of existing inequalities between men and women in law and social practices, I experienced this as an injustice for which I found no justification, except the realisation of living in a patriarchal system that exploits religion, traditions, customs and laws to maintain and strengthen its power and control over women. This can only lead to injustices and acts of violence against women, both in the public and private sphere.

Since 1997, this awareness has been the driving motivation for me to join ADFM, which was created precisely to fight against gender-based violence, by encouraging women to denounce it, by accompanying survivors of violence and by advocating for egalitarian laws and criminalising violence against women.

It has become increasingly clear that in order to see tangible results, the way forward is one of collective mobilisation and solidarity, to carry out advocacy actions in Morocco, but also in Tunisia, Egypt, Jordan or Lebanon. It’s necessary for our states to harmonise their national legislation with the international conventions they have ratified and adhere to the Istanbul Convention. 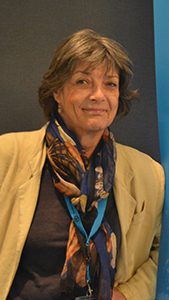 It deeply worries me to observe that, on the ground, women and girls in Europe remain targets of unacceptable violence. Fear, shame, lack of trust in authorities are but a few explanations for the very low prosecution and conviction rates for crimes of domestic violence and rape, as well as for underreporting of such crimes.

One in three women over the age of 15 in the EU has suffered physical and/or sexual violence.

That is why the Istanbul Convention – a legally binding tool – must become a major and unanimously shared tool within the EU.

The fact that the European Union signed the Istanbul Convention on 13 June 2017 is certainly an encouraging sign, but combatting violence against women has of yet not become a common priority among all Member States. It is particularly regrettable that nine EU countries (Bulgaria, Hungary, Ireland, Latvia, Lithuania, Luxembourg, the Czech Republic, the United Kingdom and Slovakia) have of yet not ratified it.

We cannot say that these countries are immune to the phenomenon. However, the text of the Convention has been the target of attacks, for instance in Bulgaria, which refused to ratify it and even boycotted the meeting of the European Parliament dedicated to the issue. In Croatia, ratification was achieved with many difficulties on June 12, leading to often violent demonstrations by opponents of its ratification.

Under the influence of traditionalists, especially the Catholic and Orthodox Churches, opponents of the Convention focus on a contentious interpretation of the word “gender”, which they interpret as a premise to a social project towards legalizing gay marriage, homosexuality and the introduction of gender theory in education; in short, a threat to traditional family values. By wishing to impose it, the EU would thus go beyond its field of competence.

This opposition often reflects an archaic concept of the role of women in our societies, a vestige of a patriarchal system that denies their access to equal rights and thus to their autonomy. One notes for instance the effect of such thinking on abortion rights. There is also the risk that conjugal and family violence could be considered exclusively a “private family matter”, thus averting denunciation and judicial convictions. Moreover, when it comes down to the national interest, women’s rights are usually the first to be deprioritized because related budgets are reduced.

Meanwhile this nationalist reaction and the rise of xenophobia have lead to the rejection of foreigners. The “migrant” status often puts women in a legal disadvantage or vulnerability given their dependence on their spouse or employer. This vulnerability is worsened by an overall rejection of migrants. The Convention also tackles this problem and obliges ratifying countries to recognize gender-based violence as a form of persecution under the 1951 Geneva Convention on Refugees.

However, we do not want to forget the recent victories, such as the referendum in Ireland in May, which led to the repeal of the 8th amendment to the constitution, which made abortion illegal. It is a beacon of hope for girls and women in European countries where, as in Malta and Poland, abortion is still criminalized.

We should constantly remind ourselves that nothing is ever irrevocably acquired; a recurring temptation to backtracking is very much a part of our history.

The EU must play an important role in promoting certain standards within the European Union. The political commitment of the Member States to combat all forms of domestic violence is already stated in the Treaty on the Functioning of the European Union (TFEU). But the EU does not yet have a binding instrument and, despite efforts since 2010, it still does not have a European strategy for combatting violence against women.

Faced with this reality, we need to strengthen our coalitions so that in every EU country women know that their problems have already been overcome by other women elsewhere. The great momentum of Polish women against the parliamentary initiative to “Stop Abortion” will be engraved in our memories for a long time.

It is one of the main strengths of EuroMed Rights and we are actively participating in a European Coalition to end the violence suffered by women and girls, leading up to the ratification of the Istanbul Convention by the EU and all its Member States.