EuroMed Rights’ most recent publications and the list of members related to this programme are available on the right-hand side of this page. 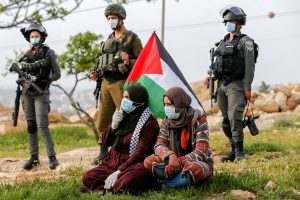 EuroMed Rights has continued to convey the demands of the human rights community in Palestine to European audiences. This has not fallen on deaf ears among policymakers active in the foreign human rights arena.

On 3 March 2021, the Office of the Prosecutor of the International Criminal Court (ICC) opened an investigation into the situation in Palestine, a major milestone in the quest for accountability since 2014. EuroMed Rights, its members and partners, have relentlessly advocated towards the EU and its Member States, based on research and evidence-based advocacy, to support an ICC investigation. After the opening of the investigation, the EU Observer on 30 March 2021 published a EuroMed Rights Op-Ed on the role of the EU regarding the ICC investigation on the situation in Palestine.

However, despite these developments, Israel has increased its human rights violations against Palestinians across all the territories it controls. After the widespread bombings in Gaza, killings in the West Bank, and police brutality in Israel against Palestinians in May 2021, EuroMed Rights stepped up its efforts. On 10 June 2021, the UK-based Middle East Eye published an Op-ed signed by EuroMed Rights on the EU’s lacking willingness to use its leverage over the Israeli offensive in Gaza.

Israeli authorities intensified their efforts to discriminate, oppress and criminalise human rights organisations in Palestine. On 22 October 2021, Israeli Defense Minister Benny Gantz designated six Palestinian human rights and civil society organisations (CSOs) as ‘terrorist organisations’, including Al-Haq. With this official designation, the Israeli authorities took one step further in their strategy to close down the Palestinian human rights movement. EuroMed Rights has channelled efforts in Europe to criticise this unprecedented move. For instance, on 27 October 2021, the Irish Minister of Foreign Affairs Simon Coveney released a statement criticising the Israeli decision. At the EU level, on 29 November 2021, eight MEPs from different political groups (Renew Europe, S&D, Greens/EFA and The Left), issued statements of support to the six CSOs during an exchange of views at the European Parliament.