Algeria, Convention for the Protection of the Rights of All Migrant Workers and Members of Their Families, Europe, migrants and refugees, Migration, Migration and Asylum, Morocco / Western Sahara, Press Release

Open Borders : Stop the War on Migrants and Refugees!

Brussels, 18/12/15 – 25 years after the adoption of the UN Convention for the Protection of the Rights of All Migrant Workers and Members of Their Families, EuroMed Rights expresses its deep concerns over the serious consequences of the borders’ closure and their impact on the fundamental rights of migrants and refugees. The report released today by EuroMed Rights, on the Militarisation at the border between Algeria and Morocco, provides in this regard many examples.

The Euro-Mediterranean region is currently the stage of a particularly intense inter-state cooperation. As stated by Donald Tusk, President of the European Council, during his recent visit to Turkey, this cooperation aims essentially to “stem migration flows” towards the EU. This quote is the finest evidence that shows how human rights are at the margin of migration policies, considered as an obstacle to be eliminated.

The pattern of State violence is repeating, in the North and in the South of the Mediterranean: live bullet shoot in the Sinai, detention of asylum-seekers in Israel potentially for an unlimited period, raids and deportations in Morocco, Algeria and France, use of tear gas at the Bulgarian and Greco-Macedonian border; deployment of the army in Hungary and Slovenia, elevation of a wall between Greece and Turkey, barbed-wired fences in Ceuta and Melilla but also in many other European countries, within the Schengen area itself.

Where the right to passage is allowed, it remains very limited and migrants are selected according to their nationality. The techniques and the methods used hardly differ from push-backs or refoulement, taking the risk of removing migrants and refugees to countries where their life may be in danger. In any case, this situation is pushing people to seek new routes which turn out to be even more dangerous and deadly. .

Our organisation and its 60 members hereby strongly denounce the current bargaining that the EU is conducting with its “Mediterranean partners”. On this 25th anniversary of the Convention for the Protection of the Rights of All Migrant Workers and Members of Their Families, we would like to stress the universality of human rights cannot suffer any exception or geographical arrangement.

It is high time that the countries of the Euro-Mediterranean region meet their responsibilities in addressing the reception and protection challenges facing them, in compliance with their international obligations, including the 1990 Convention. Focus on security as a primary approach is putting human rights at risk. Mobility is not a threat. Open borders to migrants and refugees. 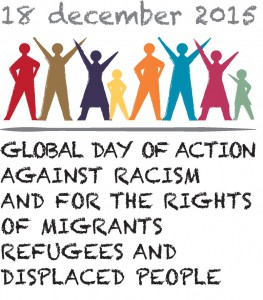 Israeli settlement products: from the “right to know” to full respect of international law