EuroMed Rights aims to closely monitor policy developments impacting on the rights of migrants and refugees in the Euro-Mediterranean region with a particular focus on the EU’s role in promoting these rights or, conversely, in jeopardising them. The Network strives to ensure that the European Union and its Member State’s relations with partner countries in the South/East Mediterranean region are favourable to the rights of migrants and refugees including with respect to access to mobility for all, both in law and in practice.

The announcement by the European Union of a “new approach to a new neighbourhood”, in the wake of the 2011 uprisings, has mostly translated in Euro-centred and security-geared cooperation terms. These trends have dramatically accelerated in 2015 through the adoption of the EU’s Agenda on Migration, a pure “bargain on human lives” (EU/Turkey cooperation) and a “war on migrants and refugees”.

Despite some promising legislative reforms in the region, e.g. the regularisation policy in Morocco, anti-racism law in Tunisia, the situation remains fragile in the absence of systematic and effective human rights mechanisms. The shrinking space for civil society, militarisation of borders (e.g. Algeria/Morroco) and mass population displacement from Syria or Libya have gradually pushed the question of universal rights back at the bottom of the political agenda, especially for foreign nationals.

In light of unprecedented financial and technical resources dedicated by the EU and its Member States to “external cooperation” on migration with the Maghreb countries, EuroMed Rights has prepared two briefings that present the main cooperation instruments in place as well as recommendations for civil society actors to better contribute to their definition, implementation and evaluation. The annex table summarises the main applicable international legal frameworks. 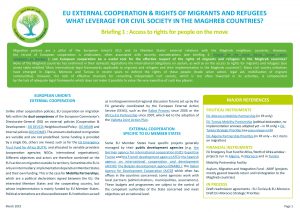 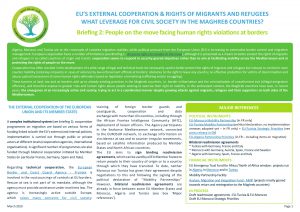 Read our report: EUROPEAN AGENDA ON MIGRATION MISSED OPPORTUNITY TO PROTECT RIGHTS AND SAVE LIVES [19/05/2015]

The Migration & Asylum Working Group brings together over 20 experts from 17 countries in the Euro-Mediterranean region. It is the resource hub for implementing as well as providing strategic, technical and professional input to the programme. The MAWG meets twice a year. Working languages are English and French.

Joint statement: Safeguard the rights of refugees in Turkey!