Discrimination based on gender and sexual orientation, and violation of women’s rights have persisted in the Euro-Mediterranean region during the past three years. Across the region, new political movements, rejecting the legality and applicability of international human rights framework ensuring the human rights of women and LGBTQI+ persons, have emerged. Recent studies suggest that women in the Southern and Eastern Mediterranean region continue to experience gender-based violence more often than anywhere else in the world.

The EU and member states have adopted the European Strategy for Gender Equality 2020-2025 and the European LGBTIQ Strategy 2020-2025, as well as the EU’s Gender Action Plan (GAP III), which cover the EU’s external action in third countries, i.e., the MENA. Furthermore, the Istanbul Convention on preventing and combating violence against women and domestic violence is open to non- EU countries. EuroMed Rights aims at promoting and participating in advancing gender equality in the Euro-Mediterranean region. Read more on this political goal. 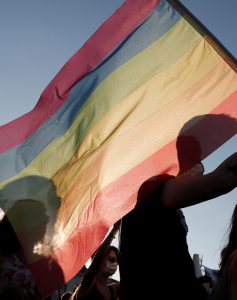 The COVID-19 induced lockdowns saw levels of cyber (as well as domestic) violence spiral. As women are 27 times more likely than men to be harassed online, EuroMed Rights consolidated its efforts to raise awareness about online gender-based violence in the MENA region.

EuroMed Rights’ thorough research led to the publication of the report “Spaces of violence and resistance: Women’s rights in the online world” in June 2021. The report is the result of extensive collaboration between members of EuroMed Rights’ regional working group on Women’s Rights and Gender Justice and contributed to opening a debate on the topic at national levels.

On 13 November 2021, a coalition of Moroccan women’s rights organisations and activists (including members of EuroMed Rights and of the Regional Commissions of the National Council for Human Rights) met for the first time to discuss online gender-based violence and the lack of definitions surrounding this topic in the Moroccan legal framework. The organisations formulated a set of recommendations on combating online gender-based violence to be submitted to members of parliament, key institutions, civil society actors and the EU delegation in Morocco, representing the first step in a bigger advocacy project on online violence against women.

The report reverberated at the European level. The NGOs Oxfam IBIS and KVINFO invited EuroMed Rights to present the findings of its research at the 2021 edition of the Danish feminist “TalkTown” festival. EuroMed Rights also shared an overview of threats in online spaces faced by women human rights defenders in the MENA region.

In December 2021 EuroMed Rights launched an online tool to monitor backlashes to gender equality in the MENA region – referred to as the “Backlash map”. This project precedes a collaboration with the Moroccan queer collective Nassawiyat for a podcast episode on backlashes to LGBTQI+ rights in Morocco. To date, the “Backlash map” has attracted the attention of international NGOs and potential partners, such as Oxfam Novib.

Since 2004, EuroMed Rights has brought together women’s rights organisations from the North and South of the Mediterranean on an equal footing. The group’s work is based on four axes: networking and capacity building; monitoring and documentation; advocacy; and crucially solidarity.