As the European Parliament is set to look at the Commission’s ‘bold’ Agenda on Migration tomorrow, the European Mediterranean Human Rights Network (EMHRN) warns of its many pitfalls and shortcomings.

Much was expected from the European Agenda on Migration. Regrettably, even its few positive elements are unlikely to be fully embraced by Member States, while its border management and anti-smuggling elements will likely be re-endorsed as confirmed by the latest EU Summit on 23 April 2015.

Although imperfect, the Commission’s proposal of resettlement and internal relocation quotas, as well as its willingness to reopen the debate on the Dublin Regulation are welcome overdue steps. However, the target of resettling 20,000 refugees per year by 2020 is far below what Europe’s contribution should be in the context of the current refugee crisis at its borders, including 4 million refugees from Syria in Jordan, Lebanon and Turkey. In this respect, the EMHRN regrets that no reference was made to the 2001 EC Directive on Temporary Protection that should be reactivated to provide safe access to refugees seeking protection at Europe’s shores.

Oblivious to the failure of many Member States to provide effective access to asylum procedures, the Commission has reiterated their claims of the ‘unfoundedness’ of too many asylum claims and has pledged to reinforce deportation mechanisms.  It is also regrettable that no concrete proposal was made to provide greater mobility to non-highly skilled workers, contrary to what Commissioner Avramopoulos had called for when he assumed office.

Although not a search and rescue agency, Frontex takes the centerpiece of the agenda, illustrating the EU’s stubborn security approach to migration. Granting the agency additional competences on forced return is overlooking reports of human rights violations and the lack of safeguards during its operations, including the absence of democratic oversight on its external action. Moreover, tripling its budget is likely to make migrants and refugees keener on avoiding border control and undertaking more perilous journeys.

The prospect of making migration an element of the Common Security and Defense Policy, and the use of military means to clamp down on smugglers are particularly worrying. Indeed, military engagement in Libyan ports to destroy smugglers’ boats is false solution that does not address the need for those in need of protection. Blaming smuggling networks while failing to provide safe access to protection is counterproductive, hypocritical and dangerous.

Faced with a pressing need to provide more legal and safe channels to its territory for both migrants and refugees, the Commission’s baby steps fall short of protecting rights and saving lives, its declared objective. By focusing on the consequences rather than the real root causes of irregular migration, the Commission has missed an opportunity for a meaningful alternative the EU can and should embrace. 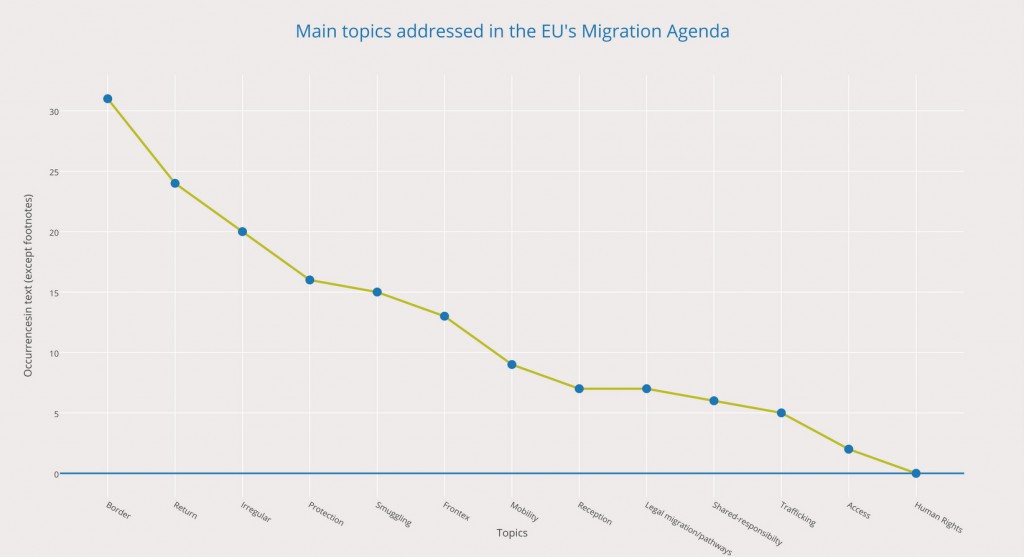 Beijing +25, a bitter anniversary for women’s rights and gender equality

EU News on the radar