EuroMed Rights’ work on Turkey dates back from the foundation of the Network in 1997. The current programme’s objectives are twofold: monitoring human rights national policies with a focus on trial monitoring and the rule of law, and supporting members in their networking and advocacy activities in the country, as well as at European and international levels.

EuroMed Rights’ most recent publications and the list of members related to this programme are available on the right hand-side of this page. 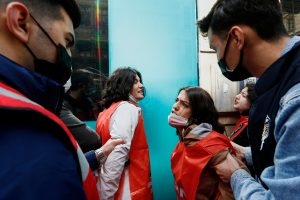 Local work undertaken by EuroMed Rights and its members in Turkey has garnered advocacy victories at both the EU and international level. In November 2021, the European Parliament Subcommittee on Human Rights invited the Human Rights Association (IHD, a member of EuroMed Rights) co-chair from the Diyarbakir branch to an exchange of views. This invitation was the result of advocacy work carried out by EuroMed Rights in favour of its civil society members.

Similarly, in March 2021, EuroMed Rights was invited by the European Parliament’s Committees on Justice/Home Affairs and Development to present its position on the Implementation report on the EU Trust Funds and the Facility for Refugees in Turkey. The report was eventually adopted by the European Parliament in October 2021, and included several of EuroMed Rights’ recommendations.

In July 2021, EuroMed Rights published a report by the Conference of INGOs of the Council of Europe, addressing the withdrawal of Turkey from the Istanbul Convention on preventing and combating violence against women. Such sharing of information contributed to increased visibility for EuroMed Rights and its members, and the protection of human rights defenders in Turkey.

This enhanced dialogue with the EU culminated in the invitation received by EuroMed Rights and its members to take part in an LGBTQI+ event in Ankara jointly organised by the Swedish and Danish Embassies. This event was particularly important given the ongoing repression faced by the LGBTQI+ community in Turkey. It followed intensive work carried out by EuroMed Rights to connect the two embassies with local LGBTQI+ activists.

EuroMed Rights also supported local members and partners. The arrest of the Human Rights Association co-chair Ozturk Turkdogan on 19 March 2021 triggered direct reactions from the EU and the Council of Europe following recommendations issued by EuroMed Rights. The work in Turkey contributed to reinforcing relations between local civil society and these international institutions, with better visibility, protection, and increased capacity for advocacy as a result.