Morocco adopted a new constitution in 2011, at a time when the country was undergoing intense political, economic and social change and the Arab world was shaken by historic uprisings. The new constitution endorsed the separation of powers, the primacy of human rights, the strengthening of the independence of the judiciary, the principle of non-discrimination, gender equality, the recognition of the Amazigh language, the importance of the role played by civil society and the right of petition.

Ten years after the adoption of the Constitution, several provisions still need to be implemented in law and in practice. The reform of the judiciary is, for instance, one of the main challenges in Morocco. Other provisions have also proved to be restrictive, limiting their scope of application. For example, the primacy of ratified international treaties is only recognised if they respect the “national identity”.

Limitations on freedom of demonstration and assembly remain commonplace in the Kingdom. In the specific context of Western Sahara, which is de facto administered by Morocco, violations of public and individual freedoms and the systematic repression of dissenting voices are committed in violation of Morocco’s international commitments. EuroMed Rights advocates for the extension of MINURSO’s mandate to examine the human rights situation. 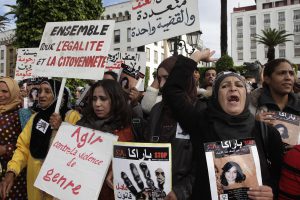 In 2021, EuroMed Rights consolidated its position as an actor for change in Morocco. This is illustrated by several invitations from NGOs and institutional partners. For example, the Global Detention Project in Morocco invited EuroMed Rights to become a local partner in their Global Immigration Detention Observatory. The EU Delegation to Morocco also invited EuroMed Rights along with its Moroccan member, the Democratic Association for the Women of Morocco (ADFM), to the civil society consultation on Morocco’s gender profile. This is particularly important as it will influence the country implementation plan of the new EU Gender Action Plan in Morocco.

The Moroccan Justice Reform Working Group pursued its advocacy and communication work in favour of human rights organisations and defenders. EuroMed Rights organised two workshops on the ‘decriminalisation of minor offences’, during which Moroccan civil society organisations entered into discussions with the National Council for Human Rights, the Public Prosecutor’s Office the General Delegation for Prison Administration and Reintegration, and the Ministry of Justice to formulate recommendations that will be used as advocacy tools in 2022. The efforts featured on the evening news channel Al Aoula.

EuroMed Rights also extended its reach by including two emerging youth LGBTQ+ collectives in its Women’s Rights and Gender Equality Working Group. This is part of an effort to ensure better intersectional and youth representation.

In Huelva as elsewhere, human rights are priceless